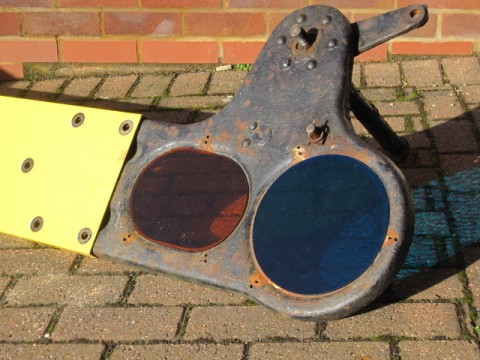 Colin fills us in on some of the background information on these train signals:

"My signals are “British Railways Semaphore signals” and were made sometime in the 1950’s. Semaphores started to appear in the 1850’s and there are a few still being used today. Generally found on a tall post for good visibility to an oncoming train, the red one is called a “home” signal and the yellow, a “distant.” The red one means a train should stop/not pass the signal when the arm is horizontal but that the line ahead is clear if the arm is raised to roughly 45 degrees. Certain regions of British Railways (especially the Western Region around Bristol) used a version which lowered when the line was clear and so to differentiate, mine are “upper quadrant” semaphores whilst the others are “lower quadrant.” Basically though, if the arm of a red home signal  was horizontal, then no matter where you were, the driver had to stop.

The yellow “distant” signal basically gives advance warning of what the next red “home” signal will be showing. It would be seen first by the train driver long before the red one comes into view. If the next red home signal is horizontal/at stop then the yellow “distant” further up the line will be too. The “distant” repeats the next “home” signal the driver will see and basically gives a greater braking distance if needed. Because the “distant” is classed as a type of warning signal, the driver may pass it when the arm is horizontal but be ready to stop at the next red home signal. If the yellow signal is raised he knows the next red one will also be raised so he can carry on at speed knowing the line ahead is clear.

The round signals are commonly called “ground disc signals.” They have a variety of uses but they are used where traffic is slower and either space isn't available or the expense of an arm on a post isn't justified. They used to be commonly found in goods yards or stations. Again, the same principle applies that if the red band is horizontal, the driver must stop. When the disc rotates again to roughly 45 degrees, he may proceed.

Last but not least, all this is fine when it is daytime or in good visibility because the arms can be seen but to help at night, a light behind the signal arm would shine through suitable glass windows (the “spectacle plate”) to give a traffic light effect. The “Home” signals have red and green glasses and “distant” signals have yellow and green so the driver could then tell what he was being told to do. A red light meant stop, green meant go no matter what type of signal he passed and yellow meant it was a distant signal and his next one would be a red light at the home signal. The same arrangement worked for the ground disc signals too."

Get the latest with our newsletter