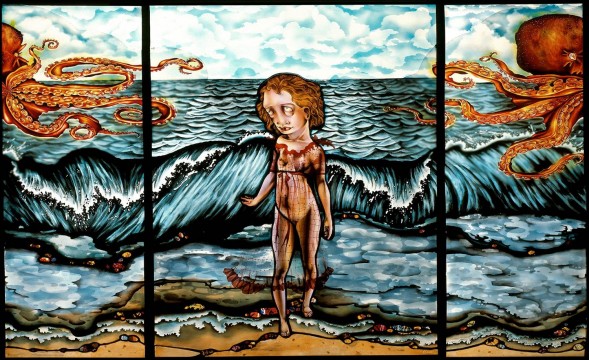 At the beginning of April, we welcomed stained glass artist and incurable doodler Judith Schaechter to Creative Glass Guild to deliver a talk about how she became an artist, her discovery of glass and her creative process.

Judith introduces herself by telling us how a doctor advised her not to fly just hours before she left Philadelphia after having a small procedure done on her ear, and we feel very lucky to have her here. The opening slide of her presentation is a collage of every stained glass window she has ever made. There are hundreds of windows in this image, and though they are small, those of us who know her work are able to pinpoint our favourite pieces among them. Judith made this slide as she thought it would be interesting to look at them all together, and she’s right. It’s clear that rich, vibrant colours have always been a big part of her designs and the way that light is captured within them. This is a massive body of work, and Judith’s background in fine art (she thought she was going to be an oil painter) is visible in the composition of the pieces and intricacies of her figures.

“One of the most influential things on me and on anybody is going to be one’s family.” Judith explains, giving us an insight into how she became an artist. She is from a mixed religious background, and feels that she’s never quite fit in anywhere. “I can’t ever say that I am anything, and I think that this was hugely influential on me being very comfortable working in a medium that wasn’t considered reputable in Art School.”

She was never quite a fine artist or a craftsman from the start, and when she would discover glass at the Rhode Island School of Art and Design (an experience she found extremely liberating), she would avoid finding out about the history of it and convince herself that there wasn’t one as to allow herself more freedom. Her mother kept and celebrated many of her childhood drawings. She was magnetically attracted to images that horrified her, and came to realise that art was the most powerful thing – the form of expression that moved her the most.

Childhood experiences also gave Judith subject matter to express in her artwork. She was terrified of throwing up (as a result of the aftermath of once eating the contents of her mother’s ashtray), and finds therapy in expressing these feelings in her artwork.

“They’re almost like talismans against what I’m upset by. I’m trying to work through the emotion, not delight in it.”

From an early age, Judith took interest in the various ways the human form is represented, and shows us early drawings of caricatures, super heroes and women in beauty contests. She has named some of the people in these drawings and it is obvious that some basic story elements played a factor as she created them, although she says that she doesn’t necessarily create a narrative for each piece she makes. She’s more interested in beauty, and never had much confidence in her appearance.

“If I didn’t have what it takes in terms of beauty, I could create beautiful things that would stand surrogate for me, and I could seduce people with beautiful objects.”

“I will make beautiful things according to my definition of beautiful.”

Judith shares some early self-portraits with us and notes that as she’s got older she is no longer concerned that they resemble her, but more that they are pictures of her if she could be anybody.

Her dissection of how she discovers ideas for her artwork is articulate and honest. She explains that the problem with the question “Where do you get your ideas?” presumes that art is made based on ideas.

“It presumes that in order to make art one must have in their head a template of what’s to be made. I do not have this template, I do not have ideas! I make first, then I have ideas.  Maybe.”

When she needs a remedy for a creative crisis, she sets herself low expectations:

“I disinhibit myself by giving myself permission to do garbage. If I go into a project with the intent to make something awful there can be one of two outcomes. It’ll be awful and I will have the satisfaction of being right, or it will accidentally not be awful and I will be delighted.”

As Judith doesn’t know what her finished piece will be from the offset, she finds it to be a false dichotomy to separate craft from inspiration and likes to complete the whole process herself. If she were to have somebody build it for her, she would deny herself the creative process. She explains that there needs to be an element of surprise, and for this reason she doesn't do colour drawings.

Most of Judith’s figures are developed from faces which she doodles. She confesses that she is an incurable doodler, and finds the best setting for drawing her faces is one in which she is completely distracted by something else, be it while watching a TV show or at a faculty meeting (she teaches at the University of Arts in Philadelphia). From here she will find a body for the face out of hundreds she has already drawn, or she will draw a new one.

Judith often makes panels a couple of times to discover what works. The bright designs are usually built in three layers of different coloured flash glass, namely red, blue and pink which she engraves and sandblasts while incorporating painting and silver staining. We are treated to some close-ups of the garden in Judith’s piece 'The Birth of Eve' and an explanation of the concept and creation of 'Dream of the Fisherman’s Wife', and the detail is just incredible. She also talks us through a project of 17 windows that she created for Eastern State Penetentiary, more details of which can be found here on her blog.

As soon as she discovered glass, she knew that she wanted to do it for the rest of her life, as there is nothing quite so powerful and expressive as light.

She holds the individual’s right to collect and create art in high prestige:

“I would say that once one has risen above subsistence level survival the next thing you do no matter how impoverished you may be is to ornament your living space. This is not a frivolous luxury, this is crucial to our identity as a species and as individuals.”

As a room of glass enthusiasts we were inclined to agree and were deeply inspired by the complexities of Judith’s creative processes. If you’d like to find out more about Judith and her stained glass you can follow these links:

Image: 'Dream of the Fisherman's Wife' by Judith Schaechter

Get the latest with our newsletter